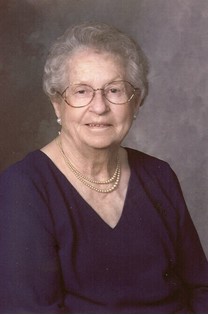 Guestbook 5
Funeral services for Doris E. Burden of Riverton are at 10 a.m. on Friday, June 18, at the Davis Funeral Home. Pastor Cleveland McSwain will officiate and interment will follow at Mountain View Cemetery in Riverton.

Viewing will precede the funeral, from 9 to 10 a.m. Friday, at the funeral home.

Mrs. Burden died at the Help for Health Hospice Home in Riverton Monday evening, June 14, 2010. She was 83.

Doris Eva Ekman was born in Henry, Neb., on Feb. 8, 1927, the daughter of Jay B. Ekman and Florence May (Lacy) Ekman. In 1937, at the age of 10, she moved to Riverton with her family. Her father raised silver fox here and she was graduated from Riverton High School with the Class of 1944.

Mrs. Burden was a Lab Technician and Physicians Assistant who worked for Drs. Fuerst and Kendell for 20 years. She also helped her husband on Two Mile Road before moving into Riverton in July of 2005.

Mrs. Burden was a member of the VFW Auxiliary, Homemakers Club, and Royal Neighbors.

Her family said she enjoyed gardening, was avid fisherman, loved crocheting, and enjoyed doing other crafts.

She was a member of the First Baptist Church of Riverton.

Survivors include sons, Dick Sinner of North Richland Hills, Texas, and Robert Miller and his wife Clare of Riverton; a daughter, Pamela Carreiro and husband David of Hollister, Calif.; a step-son, James Burden and his wife Mary Jo; step-daughter, Marlene Steger and her husband A.J. of Great Falls, Virginia; 20 grandchildren, and 49 great grandchildren.

She was preceded in death by her husbands, Ralph Miller in 1974 and Herbert Burden in 2006; sons, Bill Miller and John Sinner; and brother, Lee Ekman.

Memorials may be made to Little Wind Hospice or Help for Health, in care of the Davis Funeral Home, 2203 West Main, Riverton, WY 82501.