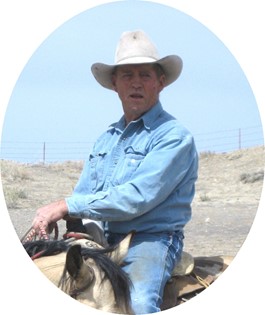 Guestbook 9
Memorial services will be held for William Alan (Billy) Frank, 71, at 2:00 p.m. on Friday, June 18, 2010, at Davis Funeral Home in Riverton, Wyoming. Billy died of an accident while working on his family ranch near Shoshoni on Monday, June 14th, 2010 Billy was born May 30, 1939 to William and Pauline (Korell) Frank in Torrington, Wyoming. The family moved from Scottsbluff, Nebraska to a ranch on Squaw Creek outside of Lander January 1, 1948. The family moved to Lyons Valley in 1950. Billy graduated from Fremont County Vocational High School where he was active in FFA, football, and wrestling. He attended Casper College and served in the National Guard in 1962. He and Jeanne Reed were married on April 7, 1965 in Shoshoni. Jeanne and Billy joined the Frank Ranch in Lyons Valley near Lander. Billy was a talented Saddle Bronc rider, and Steer Wrestler who won many competitions, and was very competitive in cutter races. Together with his father, Bill, and brother, Gary, they were Bill Frank and Sons Rodeo Stock Contractors from the late 1950's to early 1970's. In 1990, following a serious horse accident, he and his wife along with their two sons moved to a ranch they bought on Copper Mountain, northwest of Shoshoni. He loved ranch life and his precious granddaughters. He is survived by his wife, Jeanne; his sons Thomas William (Mandy) Frank: Ronald Reed (Darby) Frank: grandaughters Hailey, Kate, Sage and Tace; brother, Gary (Diane) Frank; sisters Betty (Mike) McMahon; Karen (Lee) Wilkes; Gail O'Neal; a sister-in-law Linda Reed; and several nieces and nephews. Preceded in death by his parents, brother Ron and brother-in-laws Clinton Reed and Benny O'Neal.