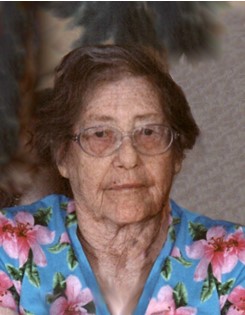 Guestbook 1
Funeral services for Agnes Amelia Guyette, 89, are at 10 a.m. on Wednesday, June 30, at the Fellowship Baptist Church in LaBarge, with Pastor Ed Bryan officiating. Interment follows at the Viola Cemetery in LaBarge. Visitation is one hour prior to services at the church. Mrs. Guyette died on Saturday, June 26, 2010 at the Wind River Healthcare and Rehabilitation Center in Riverton. Agnes Amelia Miller was born in Kemmerer on March 12, 1921, the daughter of Joseph S. and Fae (Butler) Miller. On July 8, 1957, she married Gordon C. Guyette in Evanston. She continued to live in Lincoln County until 2008 when she moved to Riverton, due to health issues. Her family said Mrs. Guyette enjoyed caring for her flowers and trees. Survivors include her daughters; Tina Sloan and children Jerry Murphy, April Woodward and husband Alan along with their daughters Hannah and Danyka; Ivy Miller all of Riverton. Sons; Terry and wife Natalie Guyette and their children Kristopher and Houston; Franklin Miller all of LaBarge. Brothers, Joe, Art, George Miller, and sister, Mary Mayne all of Diamondville. Numerous nieces and nephews. She was preceded in death by her husband Gordon Guyette; parents Joe and Fae Miller; sister, Dee Nielson; brothers, Glen and Willard Miller. Memorials may be made to the Wind River Healthcare and Rehabilitation Center of Riverton or the LaBarge Senior Citizens Center, in care of the Davis Funeral Home, 2203 West Main, Riverton WY 82501. On-line obituaries are available and condolences for the family may be made at: thedavisfuneralhome.com Services are under the direction of the Davis Funeral Home of Riverton and Ball Family Chapel of Kemmerer.