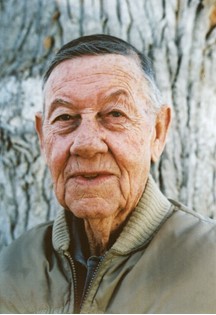 Guestbook 3
Long-time Riverton resident Allen J. Moore died on Sunday, July 11, 2010 at the Help for Health Hospice Home in Riverton. He was 84. Funeral services are at 10 a.m. on Thursday, July 15, at the Davis Funeral Home of Riverton. Burial will follow at Mountain View Cemetery with military rites. Pastor Mark Thurman of the United Methodist Church officiates. Allen J. Moore was born on Dec. 4, 1925 in Humboldt, Neb., the only child of Mildred and John Moore. He attended the Pavillion school for his elementary education. He then attended high school in Nebraska where he dropped out in the 12th grade to join the U.S. Navy. While in the Navy, he served on the U.S.S. Asphalt and U.S.S. Alamosa. He was awarded several medals -- the Asiatic Pacific, Three Stars, Good Conduct, and the WWII Victory Medal. Upon being discharged from the Navy on Dec. 5, 1946 he worked in construction and soon found an interest in granite sales. He became the co-owner of Casper Monument. In October of 1968 he married Jean Sloan. They made their home in Riverton for 48 years. In 1971, Mr. and Mrs. Moore opened Moore's Monument Service, operating the business until his retirement in 1991. Despite suffering Alzheimer's disease, his family said Mr. Moore maintained his love for family, fishing, hunting, and camping. Mr. Moore is survived by his wife, Jean; seven children, Jo (Don) Caraveau, Dick Sloan, Mike Moore of Riverton, Pat Moore of Dubois, John Moore, A.J. Moore of Vancouver, Wash., and Anita Grunstead of Montana; many grandchildren and great grandchildren. He was preceded in death by his parents, Mildred and John Moore. Memorials may be made to the Help For Health Hospice Home in care of the Davis Funeral Home, 2203 West Main, Riverton WY 82501. On-line obituaries are available and condolences for the family may be made at: theDavisFuneralHome.com Services are under the direction of the Davis Funeral Home of Riverton.