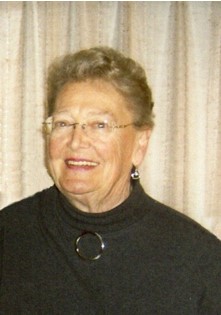 Guestbook 11
Former Fremont County Commissioner and 42 year resident of Shoshone, Jane Adamson died suddenly on July 16th, 2010 at Riverton Memorial Hospital. She was born to Bella and Archie McKinney on February 26th, 1934 in Vandergrift, Pennsylvania. She attended school in Vandergrift graduating in 1952 and attended college at the University of Philadelphia.

Jane McKinney married Lawrence Thomas in 1953 and they spent their married life in Washington, D.C. and various locations in Wyoming; Morton, Riverton, Douglas, Casper, and Thermopolis. They had two children, Jim E. Thomas and Vicki Thomas. In 1968 they divorced and Jane moved with her children to Shoshoni, WY where she worked as a bookkeeper for Curt Kaiser at the Shoshoni Garage.

Jane married John Adamson on January 24th, 1976 and they continued to make their home in Shoshoni. Jane and John purchased the Shoshoni Garage later in 1976 and together they operated the business until closing it in 1990.

Jane was very active in service to her community and very active in her church. In 1966 she was awarded an “Outstanding Young Women of America” award. She became an elder of the Shoshoni Community Presbyterian Church in 1968. She would fill the pulpit when needed, worked with Sunday School classes and was active in the renovation of the church which began in 1992.

Jane was the Shoshoni Municipal Judge from September 1980 to Jun 1982. She was elected to two terms as Mayor of Shoshoni from 1986 to 1990. In January 1991 she was elected as the first female Fremont County Commissioner. She served as Commissioner from 1991 to 19999. During that time she was liaison between the Commission and the Road and Bridge Department.

Jane was an active member of the Order of the Eastern Star, VFW Auxiliary, Fremont County Historical Society and Daughters of the Nile. In 1998 Jane brought back the commodity program to Shoshoni, the program now serves many families monthly in the community and is operated by volunteers.

Jane was an accomplished quilter, creater and knitter who frequently shared her creations with others out of the goodness of her heart. She was an avid baker, cook and canner who could be seen frequently in orchards and gardens gathering fruit for her famous jams and jellies.

There will be small local services for family and close friends in Shoshoni at the Shoshoni Community Presbyterian Church, West Second Street on Thursday July 22nd, 2010 at 10:00 AM for those wishing to attend. There will be services open to the public in Riverton to be held at the United Methodist Church, 1116 W. Park Avenue on Friday, July 23rd, 2010, at 2:00 PM. In lieu of flowers the family requests a donation be made to one of these organizations of your choice: Shrine Children Travel Fund, C/O Shrine Cub, Riverton, WY 82501 Shoshoni Senior Citizens Center, PO Box 27, Shoshoni, WY 82649 Shoshoni Community Presbyterian Church, PO Box 127, Shoshoni, WY 82649