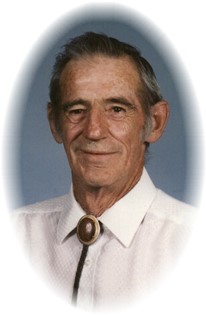 Guestbook 2
William R. "Bill" Mefford of rural Lander died at the Lander Regional Medical Center on Wednesday, Aug. 25, 2010, at the age of 77.

Interment will be at the Dubois Cemetery. Military rites will be by the Dubois Veterans of Foreign Wars with the casket covered by an American flag brought from Iraq.

William Raymond Mefford was born in Fort Collins, Colo., on July 13, 1933, the son of William Paul and Edna Mae (Naylor) Mefford. He grew up in Wyoming, attending school at Lance Creek, Casper, and was graduated from high school in Powell. He attended the University of Wyoming.

Mr. Mefford served with the U.S. Army of Occupation in Germany during the Korean War. He married Karen Nelson on Dec. 28, 1959, at the Episcopal Church in Jackson.

Mr. Mefford was a real estate broker with Realty Brokers in Riverton and Dubois, retiring from All West in Lander. He has also worked as a surveyor for Nelson Engineering of Jackson, primarily in the Dubois area. In Dubois, he had also worked for Albright Sand and Gravel. In the 1960s, Mr. Mefford ranched and managed the Ziltner place near Crowheart for five years. He moved to Dubois in 1971, making that his home for 20 years. For five years, he owned the El Rancho Motel in Riverton, in conjunction with his real estate business. He moved to Fort Washakie for four years, and then to Lander in 2007.

Mr. Mefford was a member of the First Baptist Church of Lander and the First Assembly of God Church in Riverton.

He was a life-member of the Veterans of Foreign Wars in Dubois and a member of the Riverton Real Estate Association.

His family said he loved to fly, hunting, fishing, being outdoors, and horses. A rock hound, he collected primarily jade and petrified wood. They said he enjoyed planting many trees and spending time with his grandchildren.

Memorials are suggested as a tree planted in the donor's locality in Mr. Mefford's memory.