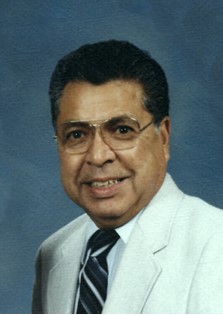 Guestbook 13
Memorial services for Enez Hernandez of Riverton are at 10 a.m. on Saturday, Oct. 16, at St. Margaret's Catholic Church in Riverton. The Rev. Father Drew Duncan will officiate. Inurnment will follow at Mountain View Cemetery in Riverton. Rosary is at 7 pm. Friday, Oct. 15, at St. Margaret's Catholic Church. Mr. Hernandez died at the Wyoming Medical Center in Casper on Tuesday, Oct. 12, 2010, at the age of 81. A life-long resident of Riverton, Enez Hernandez was born in Greybull on April 20, 1929, the son of Joe and Christina (Aragon) Hernandez. He was graduated from Riverton High School in 1948 and attended the Colorado School of Banking in Boulder, Colo. While in high school he worked at the dry cleaners and then worked for the Bureau of Reclamation and Knight Theaters for several years before entering the banking industry. Mr. Hernandez was a banker at the First Interstate Bank of Riverton, retiring in 1989 after 25 years with the company. He married Georgia Ann Abeyta on Nov. 23, 1957, at St. Margaret's Catholic Church of Riverton. He was of the Catholic faith and a member of the Knights of Columbus. His family said Mr. Hernandez enjoyed working in his yard and taking care of his house. They said he especially loved following the Riverton Wolverine, Wyoming Cowboy, and Notre Dame athletic teams. The family said he was a firm believer in progress for the Riverton schools and proposed stadium. Survivors include his sons, Phillip D. Hernandez and his wife Kay, and Thomas E. Hernandez and his wife Barbette; daughter, Cricket Mitchell and husband Tim; eight grandchildren, Jamie D. Hernandez, T. Michael Hernandez, Joseph M. Hernandez and his wife Laurie Thoman-Hernandez, Jonathon D. Hernandez, Tobias A. Smith, Tyler C. Smith and his wife Krystal, Travis L. Smith, and Mark L. Matthews; three great grandchildren, Chloe J. Morlang, Curtis L.W. Smith and Taylor Hernandez. He was preceded in death by 11 siblings, including John B., Eddie, Candido, John J., Tony, Mary Gamboa, Margie Montoya, Dora Roland, Dorothy Cordova, and Ida Sisnersos; his parents, and his wife, Georgia. Memorials may be made to St. Margaret's School or a charity of the donor's choice, in care of the Davis Funeral Home, 2203 West Main, Riverton, WY 82501. On-line obituaries are available and condolences for the family may be made at: theDavisFuneralHome.com Services are under the direction of the Davis Funeral Home of Riverton.