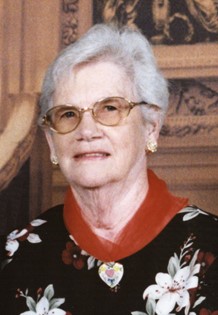 Guestbook 5
Funeral services for Joanne Herrmann of Riverton are at 11 a.m. on Friday, Oct. 15, at the Trinity Lutheran Church in Riverton. Pastor Dave Magruder officiates. Mrs. Herrmann died Monday evening, Oct. 11, 2010, at the Help for Health Hospice Home in Riverton. She was 79. Mavis Joanne Rodgers was born in Garrison, McLean County, N.D., on May 18, 1931, the daughter of Herbert "Earl" Rodgers and Edna Almira (Robinson) Rodgers. She attended country schools near Washburn, N.D., and was graduated from Washburn High School in 1949. In 1951, she was graduated from Capitol Commercial College. She married Ted. L. Herrmann, Sr., on June 15, 1951, at the Zion Lutheran Church in Bismarck, N.D. They moved to Cheyenne in 1953, then back to North Dakota in 1962. They returned to Cheyenne in 1964, relocated to Rock Springs in 1970 where they owned and operated the Flaming Gorge Sheet Metal Co. until 1985 when they traveled with the Laborers for Christ construction projects of the Lutheran Church. The couple retired in Riverton in 1995. She was a member of the Lutheran faith, Missouri Synod and a member of the Lutheran Women's Missionary League, Altar Guild, Sunday School, and Bible studies. Her family said Mrs. Herrmann enjoyed sewing, quilting, reading, crocheting, gardening, cooking, camping, and fishing. Her children, grand and great grand children were her pride and joy and Ted was the love of her life. Survivors include her husband, Ted L. Herrmann, Sr., of Riverton; sons, Ted L. Herrmann, Jr., of Riverton, and David M. Herrmann of Cheyenne; daughters, Cecelia M. Postma of Riverton, Debra J. Leathers of Green Riverton, and C. Kim Meyer of Cascade, Idaho; 15 grandchildren, 18 great grandchildren; sisters, Eileen Ziegler of Garrison, N.D., and Doris Bossert of Bismarck, N.D. She was preceded in death by her parents; two brothers, Donald and Leland Rodgers, and a granddaughter, Tara Herrmann. Memorials may be made to the Trinity Lutheran Elementary School or the Help For Health Hospice Home in care of the Davis Funeral Home, 2203 West Main, Riverton, WY 82501. On-line obituaries are available and condolences for the family may be made at: theDavisFuneralHome.com Services are under the direction of the Davis Funeral Home of Riverton.