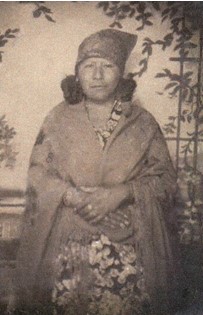 Guestbook 1
Susie Belle Shongutsie, 90, returned home October 12th, 2010 peacefully at home with family members at her bedside. She was the matriarch of the Shongutsie family and lived the traditional way of life.

A traditional Native-American service will be held at 2:00 p.m., Saturday, October 16th, 2010 at the Rocky Mountain Hall in Fort Washakie with burial to follow at the Sacajawea Cemetery. A wake will be held the previous afternoon at 4:00 p.m. at the family home at #35 St. Clair Spur.

Susie was born February 28th, 1920 to Jacob Annakie and Cora (Pevoh) Shongutsie. She lived her early years in Sage Creek before moving to Fort Washakie/North Fork where she spent the remainder of her life. She was a rancher, a cook for the Shoshone Entertainment Committee as well as a cook for the local Native American Church. She used to enjoy traditional card games, attending pow-wows, traveling to stick games with her grandsons throughout the western United States and Canada. She also was an avid bead-worker and her profits supported her family; she passed the art of bead-working down to her nieces and grandchildren.

She was a strong believer in the Sundance ceremony and travelled to attend sundances in Utah, Idaho and Montana. She taught and helped her nephews and grandsons her knowledge. Susie was one of the ten remaining elders of the Eastern Shoshone Tribe over the age of 90. She loved spending time with her great-grand children Lincey Jr., and Kiauna and loved them with all her heart.

She had many other family members, too numerous to mention.