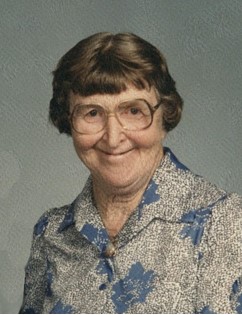 Guestbook 7
Funeral services for Erma L. Brooks of Riverton are at 2 p.m. on Thursday, Oct. 28, at the United Methodist Church of Riverton. The Rev. Mark Thurman officiates. Interment follows at Mountain View Cemetery in Riverton. A viewing precedes the service from 1-2 p.m. at the church. Mrs. Brooks died at Riverton Memorial Hospital on Friday, Oct. 22, 2010. She was 94. Erma Lucille Schmuck was born in Albion, Neb., on Feb. 28, 1916, the daughter of Charles Franklin Schmuck and Viola Retta (Parrott) Schmuck. She moved to Fremont County with her parents in 1936. On Feb. 26, 1941, she married Elmer Lee Brooks in Pavillion. The couple had a dairy farm out of Buckhorn Flats from about 1948 until 1973 and then continued to farm until 1993. Mrs. Brooks was a homemaker and engaged in the family farming. They moved into Riverton in 1994. Mrs. Brooks was a life-long member of the Methodist faith, a member of the United Methodist Church in Riverton, and had taught Sunday School in Pavillion. She was a 4-H cooking leader for 25 years. She was a past president and secretary of the Extension Club for several years. Her family said she enjoyed sewing and cooking. Survivors include brothers, Walter Schmuck of Riverton; sisters, Darleen Cooper of Riverton, and Ina Mae Harris of Mackay, Idaho; a sister-in-law, Dorothy Schmuck of Mackay, Idaho; numerous nieces and nephews. She was preceded in death by her parents; her husband, Elmer, in 1996; a brother, Marion Schmuck; sisters, Velma Steenbock and Luella Hippie. Memorials may be made to the United Methodist Church or the Alzheimer's Association, in care of the Davis Funeral Home, 2203 West Main, Riverton, WY 82501. On-line obituaries are available and condolences for the family may be made at: theDavisFuneralHome.com Services are under the direction of the Davis Funeral Home of Riverton.