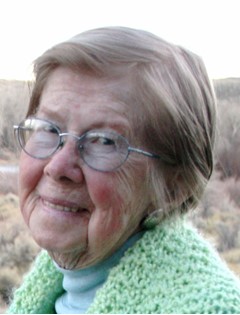 Guestbook 2
Katherine Ann "Katie" Lindeman of Dubois died at the Help for Health Hospice Home in Riverton on Sunday, Nov. 14, after suffering a stroke on Thursday, Nov. 11. She was 94.

There will be a celebration of life ceremony for her at 1:00 p.m. on Saturday, Dec. 11, at St. Thomas Episcopal Church in Dubois, followed a reception in the community room.

She was graduated from Francis Schimer College and, in 1938, married John Edward "Jack" Lindeman.

During World War II, Mr. Lindeman worked for DuPont and the couple lived in 16 different towns in less than two years. After the war, they returned to Terre Haute, where they worked and raised a family until retiring to Tucson, Ariz., in 1970.

For many years, Mrs. Lindeman served as a Girl Scout volunteer and later was employed by the Covered Bridge Girl Scouts in Terre Haute as a trainer and residential camp director.

Their family said Mr. and Mrs. Lindeman loved adventure and they travelled the U.S. and the world with family and friends; visiting places like England, Ireland, Scotland, Egypt, Greece, New Zealand and even taking a long motor home trip deep into southern Mexico. In the spring of this year, she returned to Mexico for a vacation with her family, including her daughter, granddaughter and great grandchildren.

Her family said Mrs. Lindeman enjoyed all holidays, but Easter was her favorite. They said she had a life-long love of camping and made the most of every opportunity to be outdoors, whether gardening, walking or simply sitting and enjoying the sunshine.

Mrs. Lindeman served as a minister in the Stephen Ministries. She was also active in the Clown Ministry through the Catalina Methodist Church in Tucson.

In 2007, Mrs. Lindeman moved to Dubois to be with her daughter, Ann and son-in-law, Steve. There, they said she reveled in the beautiful views of the badlands and the wildlife that she saw from their home on the Wind River.

In Dubois, Mrs. Lindeman was active in St. Thomas Episcopal Church, the Duffy Fitness Center and the Dubois Bridge Club. She had learned to play bridge in college and was an avid player her entire life until her eyesight failed recently after she achieved her life-long goal of making a grand slam.

Her family said one of Mrs. Lindeman's great loves was reading along with exercise and stretching classes with friends at the Duffy Fitness Center. They said that at age 94, Mrs. Lindeman was full of energy, often playing for hours with her great-grandchildren, Cadence and Cruz, to whom she was simply, "GG".

She was preceded in death by her husband, John Edward "Jack" Lindeman and son, Andrew Robert Lindeman.

Local service are under the direction of the Davis Funeral Home of Riverton.