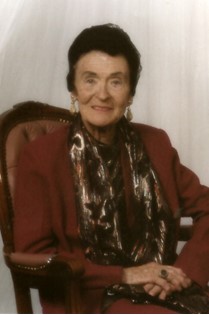 Guestbook 0
Funeral services for Eva H. Boedeker of Lander and Dubois will be conducted at 2 p.m. Saturday, April 14, at St. Thomas Episcopal Church in Dubois, with the Rev. James P. Shuman and the Rev. Lynn E. Cunningham officiating. Interment will follow at the Dubois Cemetery. Mrs. Boedeker died Monday, April 2, 2007, at Wind River Healthcare in Riverton. She was 89 years old. The daughter of Roy Andrews and Ida (Wall) Andrews, Eva Helen Andrews was born on June 18, 1917, on a ranch in Bennett County, S.D., near Cody, Neb., where her father owned and operated a rooming house, livery stables, and race horses. She grew up and attended school in that area, and was graduated from high school in New Orleans, La. In her early years, she performed as a professional dancer. On Nov. 12, 1937, she married Harold Boedeker. They were married 59 years until his death on Dec. 8, 1996. After their marriage, Mrs. Boedeker became a beautician and also ran the Homestead Motel, in addition to teaching dance. She was of the Episcopal faith. Mrs. Boedeker lived in Dubois for over 50 years, and spent the last 14 years living in Lander. She was able to visit her children in various locations, including Guam, Hawaii and California. Her family said she greatly enjoyed her grandchildren, and liked gardening and yard work. She also enjoyed poetry, having been a published author of poetry and books, one of which was titled "Tonsorial Tales." Mrs. Boedeker is survived by a son, Dr. Ben Boedeker and his wife Lisa of Omaha, Neb.; daughter, Bonny Shuman and her husband the Rev. James Shuman of Riverton; four grandchildren, Allyson and Rachel Gavaletz and Kirsten and David Boedeker. She was preceded in death by her husband Harold, her parents, and several brothers and sisters. Memorials may be made to: St. Thomas Episcopal Church, c/o Davis Funeral Home, 2203 W. Main, Riverton, WY 82501. Services are under the direction of the Davis Funeral Home of Riverton.