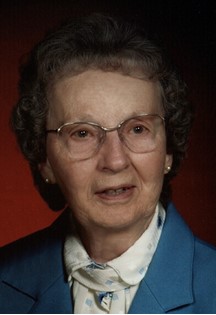 Guestbook 7
Funeral services for Barbara M. Appelhans, 86, will be held 10:00 a.m., Friday, July 15, 2011 at St. Margaret's Catholic Church with Father Andrew Duncan officiating. Interment will follow at Mountain View Cemetery. A rosary for Barbara will be held at 7:00 p.m., Thursday, July 14th at Davis Funeral Home with a visitation preceding the rosary at 6:30 p.m.

She was born June 4, 1925, in Casper, Wyoming to Samuel F. and Helen (Collver) Burtch. Barbara grew up on a ranch near Alcova, Wyoming before moving to Casper to attend schools. She graduated from Natrona HS in 1942. She then moved to Riverton and worked for J.C. Penneys.

On November 27, 1944, Barbara married Frank Appelhans. She and her husband farmed in the Riverton valley until 1978 when they retired. The couple then built a house and moved to Riverton. During their retirement they enjoyed traveling throughout most of the United States including Alaska and Hawaii.

She was a member of the Riverton Council of Catholic Women.

Mrs. Appelhans enjoyed spending time with her family, fishing, rock hunting, gardening, and traveling. She also enjoyed photography, and embroidery, and logged thousands of miles walking with her friend, Betty.

Memorial contributions to the Help for Health Hospice Home would be appeciated.