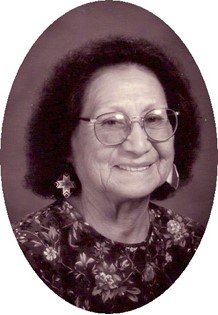 Guestbook 3
Funeral services for Estelle A. Dodge of Arapahoe were 10:00 a.m., Tuesday morning, July 19, at Blue Sky Hall at Ethete. Interment followed at the Friday Cemetery.

Estelle Anita Friday was born in the Mill Creek area of the Wind River Indian Reservation on April 7, 1932, the daughter of Chester Owl Friday and Winnie Effie (Trosper) Friday.

She lived all her life on the Wind River Reservation and attended school at St. Michael's Mission. She was Ethete Pow Wow Queen in 1950.

Mrs. Dodge was an educator, working as a cultural teacher in the Headstart program at Ethete and Arapahoe until her retirement in 2007. She also cooked at the Wyoming Indian School (formerly Mill Creek School) for three years.

She served as an election judge for the Arapaho Tribe for some three decades.

Memorials may be made to the Alzheimer's Foundation or Amedisys Hospice, in care of the Davis Funeral Home, 2203 West Main Street, Riverton, WY 82501.