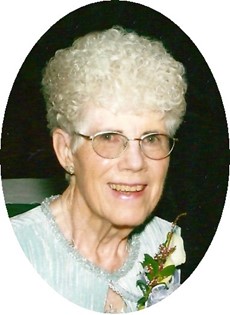 Ella Darlene VanVleet was born Saturday, October 19, 1929 in Pavillion to Stan and Ella VanVleet. She spent her childhood in Hudson and graduated from Lander Vocational High School in 1947.

After graduation she worked in the Lander area until meeting Lavern Trompke in Hudson in 1948. They were married at The Church of the Ascension in Hudson on June 15, 1949.

The couple lived and worked in Fremont County when a son was born in March 1951 and a daughter in November of 1952.

Vern took a job in the oilfield and moved several times with Darlene and family. In 1987 Darlene and Vern moved back to Riverton, with Vern retiring in 1988.

She was a member of St. Margarets Catholic Church.

Mrs. Trompke is survived by a son, Lawrence “Larry” and his wife Myrna of Riverton, their children, Tanya and husband Keith of Ft. Collins, CO., Larry Trompke Jr. of Billings, MT, and Kristi of Riverton, a daughter Linda Dee Trompke of Hudson and Sue Ransom.

Mrs. Trompke was preceded in death by her husband, Vern and her parents.

Memorials would be appreciated to St. Margaret’s Catholic School or the Hudson Cemetery Fund in care of the Davis Funeral Home, 2203 W. Main Street, Riverton, Wyoming 82501.