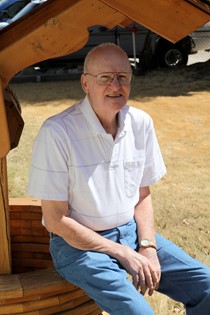 Guestbook 9
Riverton businessman Dick Fife died at his home in Riverton on Monday, Oct. 3, 2011, at the age of 73. Funeral services are at 10 a.m. on Saturday, Oct. 8, at the Church of Jesus Christ of Latter-Day Saints in Riverton, 430 Elizabeth Drive. Bishop Martin Devries officiates. Burial follows at Mountain View Cemetery in Riverton. Viewing is from 7 to 8 p.m. on Friday, Oct. 7, at Davis Funeral Home. Glen Richard "Dick" Fife was born in Brigham City, Utah on March 1, 1938, the son of Glen Shumway Fife and Lucy June (Jensen) Fife. He grew up in Brigham City, attended school there, and was graduated from Box Elder High School. He married Norma Eileen Coombs on July 29, 1955, in Tremonton, Utah. Their marriage was sealed in the Idaho Falls LDS Temple on Feb. 15, 1965. Mr. Fife was honorably discharged from the Utah National Guard after serving 2 years. The family moved to Riverton in April of 1961 when he worked with the Clover Club potato chip company. Mr. Fife was the owner/manager of Big Wyoming Trucking of Riverton. He started working in the business in 1976 as Fife Trucking with his two sons, Kim and Cyle, and with Earl Coleman. Prior to that he worked with the Riverton Police Department for seven years, attaining the rank of Sergeant. Mr. Fife was a member of the Church of Jesus Christ of Latter-Day Saints. He was a member of the Jaycees, volunteer fire department, served as an ambulance driver, started the Wyoming Youth Rodeo program, helped start the Wyoming high school rodeo program by hauling animals for the rodeos, was a merit badge youth counselor and horsemanship counselor for the Boy Scout program, and was active with his grandchildren's programs. His family said Mr. Fife liked to square dance, enjoyed bowling, woodworking, rafting, fishing trips to Canada for 15 years including a four-generation trip in 2011, four-wheeling, fishing, camping, traveling, involvement with Riverton youth, and, the family said, his cabin was his favorite place. Survivors include his wife, Norma of Riverton; sons, Cyle and wife Suzy, and Kelly and wife Patsy, all of Riverton; daughter, Kathy Finlayson and husband Clint of Riverton, daughte-in-law, Debbie Stone of Riverton; grandchildren, Kristi and Charlie Gercie, Shawna and Aleix Plouffe, Tiffini and Troy Hackett of Riverton, Jeff Fife of Laramie, Bryan Fife, of Riverton, Cyla Joe Fife of Torrington, Ty Fife of Grand Junction, Colo., Kenny Finlayson of Dickinson, N.D., Heather Finlayson, Tacee Finlayson, and Payton Finlayson, all of Riverton; great grandchildren, Braxton Fehring, Kegan Fife, and Aslyn Fehring all of Riverton; brothers, Scott Fife and his wife Ruth of Hyde Park, Utah, and Dennis Fife and wife MettaMarie of Brigham City, Utah; a sister, Vickie Jennings of Orem, Utah; two brothers-in-law, Ray Coombs and his wife Jeanne of Wellsville, Utah, and Lee Coombs and wife Judy of St. George, Utah; a sister-in-law, Margaret Cazier and husband Jack of West Point, Utah; numerous nieces and nephews, and a special friend, NettaBelle Girard of Riverton. He was preceded in death by his son, Kim, and a brother-in-law, Joe Jennings. Memorials may be made to Amedisys Hospice in care of the Davis Funeral Home, 2203 West Main Street, Riverton, WY 82501. On-line obituaries are available and condolences for the family may be made at: theDavisFuneralHome.com Arrangements are under the direction of the Davis Funeral Home of Riverton.