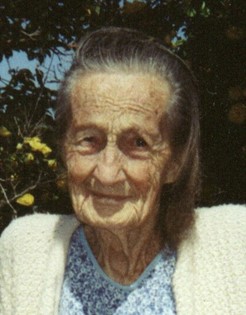 Guestbook 5
Lillian Alberta McKinsey Fairchild died at her home in Shoshoni on August 28, 2007. She was 99. She would have been 100 years old in 4 days. According to her wishes, cremation has taken place and no services will be held.

Lillian Alberta McKinsey was born on September 1, 1907 to Henry Clay McKinsey and Sarah Jane (Newman) McKinsey, south of Big Timber, MT. In her younger years she lived around Big Timber and Billings, MT. In those days, there wasn’t a lot of school, but her family said she was a very smart, self-taught lady.

On August 26 1926 she married Forrest Raines. They were later divorced.

On June 26, 1933 she married James Blakely Fairchild in Livingston, MT. He preceded her in death.

In the early 1950’s Mrs. Fairchild spent a couple of winters in California, then moved to Wyoming in approximately 1954 with her husband Jim. They lived in Hidden Valley, Gas Hills, Riverton and Shoshoni. She was a homemaker.

Her family said she assisted and donated to the Red Cross for over 90 years. At age 9 she helped knit fitted caps, wristlets and small bags for shaving kits and larger bags for the soldiers in World War I. She also picked flowers to sell after church to give to the Red Cross.

Mrs. Fairchild’s family said she loved gardening and working in the yard. She enjoyed sewing for the family, making pajamas for Christmas for grandchildren, recycling old clothes using the good parts to make clothing for younger children. They said she was always willing to help family with food, money or whatever was needed.