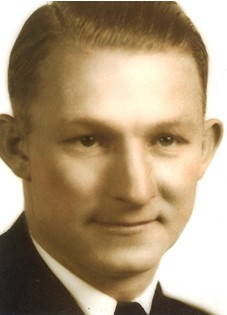 Guestbook 5
Military graveside honors for Charles F. "Pete" Peterson of rural Dubois will be at the Dubois Cemetery on Saturday, June 9, 2012 at 11:00 a.m. Dubois VFW Post 10056 will provide Military Honors.

A celebration of his life will follow the graveside at the Dubois VFW Club.

Charles Frederick Peterson was born in South Norfolk, Virginia, on Monday, March 5, 1917, the son of Charles Victor Peterson and Bessie Mae (Clark) Peterson. He moved from Virginia to California in 1935.

Mr. Peterson was a career military man, serving in the U.S. Navy for 22 years, including duty during World War II and the Korean War. He retired as a Chief Petty Officer, having joined the U.S. Navy on June 12, 1936, when he was 19 years old.

The family moved from California to Wyoming in 1968, settling first in Deaver, then moving to Dubois in 1969.

He was one of the first EMT's serving the Dubois area, a position he filled for five years.

Mr. Peterson belonged to the Dubois Veterans of Foreign Wars and the Fleet Reserve Association.

He was preceded in death by his parents; by his wife, Shirley on May 2, 1997; a son, Donald Gene "Pete" Peterson; granddaughter, Shawna Lynne Adams; three brothers, and one sister.