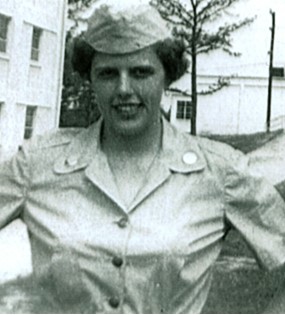 Funeral services are at 2 p.m. on Monday, Nov. 14, at the Davis Funeral Home of Riverton with Pastors Jon Martin and Ron Clapp officiating. Interment follows at Mountain View Cemetery in Riverton with military honors.

There will be a viewing at the funeral home from 1 to 2 p.m. on Monday, preceding the services.

She served with the Women's Army Corps and was said to be the first enlisted WAC to be graduated from Army Transportation School.

Mrs. Crowder was a mother, having married William George Crowder in Brooklyn, N.Y, on Aug. 17, 1957.

The couple moved to Fremont County in 1959, living in Lander for 30 years and at Kinnear since 1979.

In the 1960s and 70s, Mrs. Crowder was a freelance reporter for the Casper Star and Fremont County newspapers, covering the One-Shot Antelope Hunt and was able to meet the original astronauts in the mid 1960s.

Her family said Mrs. Crowder enjoyed stamp collecting, knitting afghans, spending time with her family, collecting postcards which were sent to her, and visiting with family and friends.

In 1993, at the age of 56, she earned her A.S. degree in office occupations from Central Wyoming College.

Survivors include her husband, Bill Crowder of Kinnear; sons, Allen Crowder and his wife Linda of Casper and Laramie Crowder and his wife Debbie of Riverton; a daughter, Johanna Peden and her fiancé Dana Culver of Shoshoni; 11 grandchildren and 12 great grandchildren; a brother, Keith Poore of Florida; sisters, Esther Huddleston of Virginia, Olive Epperson of North Carolina, and Ruth McAdams of California.

She was preceded in death by her parents; a daughter, Kelly Meyers; sisters, Ethel King and Inis Crozier, and a brother, Colan Poore. Memorials may be made to the Sunnyside Church of the Nazarene for Bibles, in care of the Davis Funeral Home of Riverton, 2203 West Main Street, Riverton, WY 82501.