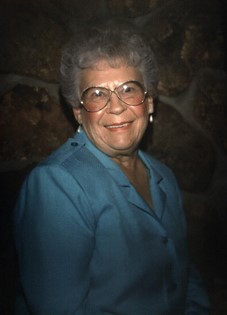 Guestbook 0
Louise I. Brown died at Riverton Memorial Hospital Sunday morning, Nov. 13, 2011, at the age of 94. Memorial services are at 1 p.m. on Saturday, Nov. 19, at the Trinity Lutheran Church in Riverton. Pastor David Magruder officiates. A carry-in dinner at the church follows the services. Louise Irene Edson was born in Mason City, Nebraska on Tuesday, Feb. 3, 1917, the daughter of Warren "Myron" and Lennie A. Edson. She was married to Jack Brown in Nebraska where they had two children -- Connie Brown-LeClair and Joe Brown. The family then moved to Riverton. Mrs. Brown was a long-time member of the Trinity Lutheran Church of Riverton. Her family said she enjoyed regular fishing trips with her husband and grandchildren. Following her husband's death, Mrs. Brown continued to enjoy traveling and taking cruises. Mrs. Brown is survived by her daughter, Connie Brown-LeClair; seven grandchildren, 18 great grandchildren, and numerous great-great grandchildren. She was preceded in death by her parents, brothers, sisters, her husband Jack Brown, and son Joe Brown. On-line condolences for the family may be made at: theDavisFuneralHome.com Services are under the direction of the Davis Funeral Home of Riverton.