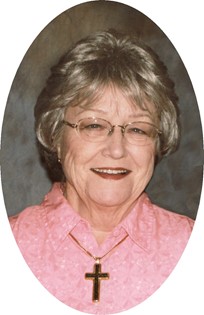 Guestbook 3
After a five-year battle with cancer, Joan Johnson was called to her eternal rest on Thanksgiving Day, November 24, 2011, in her home in Lander, Wyoming, at the age of 73 years, 3 months and 11 days.

Joan Marliene, daughter of Joel Kaleb and Elsie Elizabeth (Lindstrand) Burke, was born August 12, 1938, at Grandy, Minnesota. God made her his child when she was an infant through the Sacrament of Holy Baptism at Siloa Lutheran Church in Minnesota. She was confirmed in the Christian faith through the Rite of Confirmation. She grew up on a farm near Braham, Minnesota. Joan attended the Day School through the eighth grade and graduated from Braham High School in 1956. In 1960, she graduated from Stout State University at Menominee, Wisconsin, with majors in biology and home economics. Joan then worked at AT&T Telephone Company.

On August 27, 1960, Joan was united in marriage with Donald Leroy Johnson at Siloa Lutheran Church near Braham in Isanti County, Minnesota. Five children were born to this union. After their wedding, Joan worked a credit analyst for Montgomery Ward. In 1960, Don was called to the ministry. The family lived in St. Paul, Minnesota; Springfield, Illinois; and Van Nuys, California while he completed his schooling. Don was ordained into the Pastoral Ministry and served LCMS churches in Arkansas, Iowa and Wyoming. In 1966 they moved to Ulm, Arkansas. In 1973 they were called to Paullina, Iowa, where Joan served as a volunteer EMT, and occasionally filled in as a teacher’s aide and cook. It was also at this time that Joan bowled in a women’s bowling league. In 1987 they moved to Lander, Wyoming.

Joan was a member of Bethel Lutheran Church in Lander. She had a variety of interests including: painting, matting and framing pictures, etching, tying blankets, weaving rugs, gardening vegetables, plants and flowers, camping, collecting dolls, going to garage sales, hiking and rock hunting.

Joan was preceded in death by her parents, a brother Don Burke, a nephew in infancy, and a son-in-law Michael Syndergaard.