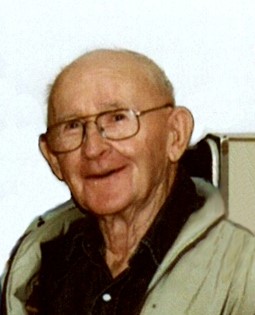 Clifford L. "Speed" Fry died in his home in Riverton on Wednesday, Nov. 30, 2011. He was 91. A Funeral service will be held at 10 a.m. on Monday, Dec. 5, at the Davis Funeral Home of Riverton. Military committal rites will follow at Mountain View Cemetery conducted by Friday-Truan Detachment 683 Marine Corp League and Veterans. Clifford Leslie Fry was born on June 16, 1920, in a school house as his parents, Earl Vincent Fry and Grace Elizabeth (Drew) Fry, were trying to get to the hospital in Wheatland. He grew up on Slater Flats and was graduated from Chugwater High School, where he met and courted his wife of 60 years, Doris L. Hancock. After graduation he studied welding at and also graduated from the Aviation Institute of Denver in 1942. Mr. Fry enlisted in the U.S. Army in 1942, and married Doris in May of 1943, just before being shipped out to the Philippines. He was honorably discharged in December of 1945 as a Sergeant, and with two bronze stars and a presidential citation. Mr. and Mrs. Fry lived in Greybull until the end of the spring school term of 1946, where Mrs. Fry was teaching, then moved back to Chugwater briefly. They then moved to Pavillion after the death of her father, purchasing the farm from her brothers. In 1949, Morrison and Knutsen Construction Co. set up their shop across the road from the Fry place. The company had been hired to build the second and third divisions of the Wyoming Canal. Mr. Fry worked for the company as a carpenter and cement truck driver. The couple began running their farm as a dairy farm with registered Brown Swiss dairy cows, often showing them at the Wyoming State Fair. In the early 1950's they began selling milk to the Morning Star Dairy in Riverton. During this time, Mr. Fry also served on the Pavillion School board from 1951 to 1959. After 27 years of raising hay, grain, and corn silage to feed the ever-increasing dairy herd, they retired and moved to Riverton. Mr. Fry then bought sharpening equipment from Clarence Kobel and began Riverton Sharpening Shop. After 18 years of running that business he finally retired. His family said that after retirement, Mr. Fry enjoyed gardening, drinking coffee at the Trailhead Restaurant, and working on various projects around his house. Mr. Fry was preceded in death by his parents; three siblings; his wife Doris; a grand nephew, and recently, his brother-in-law, Ed Hancock. He is survived by his daughter, Debbie Osborne and husband Kelly; niece, Audrey Rodeman and husband Royce; four grandchildren, Hannah, Thomas and Hank Osborne, Mary Smith and husband Levi; grand nieces, Naomi Raymond and husband John, Rebecca Lewis and many other nieces and nephews. Memorials may be made to Amedisys Home Health and Hospice Services in care of the Davis Funeral Home, 2203 West Main Street, Riverton, WY 82501. On-line condolences may be made at: thedavisfuneralhome.com Services are under the direction of the Davis Funeral Home of Riverton.