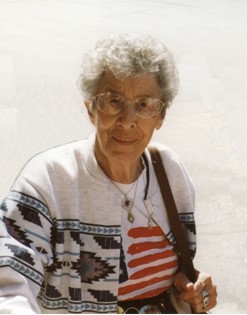 Beulah Marie Landen was born in Monarch, Wyo., near Sheridan on July 3, 1920, the daughter of William Orville Landen and Elizabeth (Potter) Landen.

She was a homemaker who married Jack Dolan Conley in Hardin, Mont., on June 14, 1941. Her family said she "worked side by side with her husband throughout his career."

Mr. Conley started working for the Wyoming Game and Fish Department in 1942, at which time the family moved from Big Horn to Daniel. They first moved to Dubois in 1946, then lived in Boulder from 1954 to 1956, returning to Dubois in 1956. Mrs. Conley made her home in Dubois until 2010 when she moved to Shoshoni to live with her daughter.

She was baptized at St. Thomas Episcopal Church in Dubois and taught a church youth group when their daughter was young.

She was also a 4-H leader in Dubois and was involved with the school activities of her daughter and friends. Mrs. Conley served as the Dubois correspondent for the Riverton Ranger in the 1960s and 70s.

Her family said she loved to play bridge, fish, and hunt.

She was preceded in death by her husband Jack; her parents and two brothers.

Memorials may be made to Amedisys Hospice, the High Country Senior Center in Dubois, or a charity of the donor's choice in care of the Davis Funeral Home, 2203 West Main Street, Riverton, WY 82501.

On-line condolences may be made at: thedavisfuneralhome.com