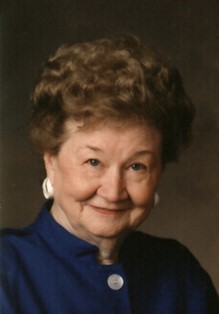 Guestbook 8
Memorial services for Virginia K. Chopping of Riverton are at 2 p.m. on Monday, Dec. 19, at the Davis Funeral Home of Riverton. The Rev. Mark Thurman will officiate.

Virginia Kelley was born in Macon County, Mo., 80 miles west of Hannibal, on Sunday, Aug. 15, 1915, the only living child of Willard T. Kelley and Mary Belle (Barnam) Kelley. When her parents divorced and her mother remarried, she was raised for the most part by her mother and step-father, George H. King, and by whose name she was known.

Her elementary school years were spent in Missouri, Colorado, Washington, and Idaho. She was graduated from high school in Lewistown, Mont., in 1933. That fall, she moved to Billings, Mont, to stay with relatives and found work with the Marshall-Wells hardware company for seven years.

In 1941, she went to work for the Yale Oil Company which was purchased during the war years by the Carter Oil Company, a subsidiary of Standard Oil Company of New Jersey, later named Exxon-Mobil. She worked there until she remarried.

She lived in Billings, Mont., for nearly 26 years when she met Porter Chopping, Sr., in Laramie while on Christmas vacation. They were married on April 19, 1959.

Her family said Mrs. Chopping loved to travel, was an avid reader, enjoyed playing bridge, and people in general. Over the years, she was active in various clubs, including the Junior Woman's Club, Order of the Eastern Star, Daughters of the Nile, Cowbelles, Garden Club, Chautauqua, and she enjoyed the Women's Coffee Club.

Survivors include an aunt, Dorothy Day of Salisbury, Mo., and her family.

She was preceded in death by her parents; her husbands; her step-daughter, Ellen Chopping Krueger; step-son, Porter Vern Chopping.

Memorials may be made to Amedisys Hospice or a charity of the donor's choice, in care of the Davis Funeral Home, 2203 West Main Street, Riverton, WY 82501.