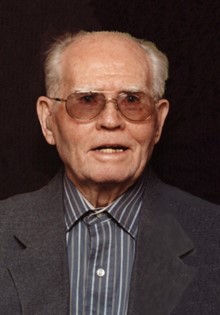 Guestbook 4
W. Travis Richardson of the Lander/Riverton area died at the Wind River Healthcare in Riverton on Thursday, Dec. 15, 2011, at the age of 97. Funeral services are at 10 a.m. on Monday, Dec. 19, at the Davis Funeral Home. Interment will be in Mountain View Cemetery. William Travis Richardson was born in Sherman, Texas, on Aug. 28, 1914, the son of William Harrell Richardson and Hattie (Henderson) Richardson. He married S. Madeline Reed in Texas on Dec. 23, 1937. She preceded him in death. Mr. Richardson lived in Oregon for many years before moving to the Lander/Riverton area to be closer to family. He was of the Protestant faith. Mr. Richardson was a millwright who worked at the Lander sawmill. His family said he enjoyed hunting, fishing, and family gatherings. Survivors include sons, Don Kenneth Richardson and Jimmy D. Richardson, both of Riverton; a daughter, Linda A. King of Lander; five grandchildren, and a brother, Wayland Richardson He was preceded in death by his wife, Madeline Richardson; his parents, Harrell and Hattie Richardson; brothers, Welton, Glen, Wayne, and Gordon. Memorials may be made to the Riverton Senior Citizens' Center, in care of the Davis Funeral Home, 2203 West Main Street, Riverton, WY 82501. On-line condolences may be made at: theDavisFuneralHome.com Services are under the direction of the Davis Funeral Home of Riverton.