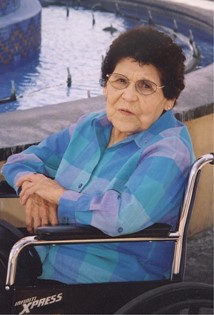 Burial will follow in Mountain View Cemetery. A rosary service will be at 7:00 p.m. at the Davis Funeral Home in Riverton.

Bea Martinez was born on October 19, 1917 in Rociada, New Mexico the daughter of Valentin and Teodora (Duran) Rodarte. She was raised and educated in New Mexico.

Bea married Santiago "Jimmy" Martinez on July 20, 1946 in Riverton, WY. The couple moved to Riverton, Wyoming in 1943 ,where she worked for Memorial Hospital for 25 years until her retirement. After the death of her spouse she moved to Gillette, WY to be near her family. Bea was a member of the VFW Ladies Auxiliary and the Odd Fellows.

She enjoyed spending time with her family, friends and her women's prayer group.

She was preceded in death by her parents, husband, son, and two brothers.

Memorials and condolences may be sent in Bea's name in care of Gillette Memorial Chapel, 210 w. 5th Street, Gillette, Wyoming 82716 or condolences via the internet at www.gillettememorialchapel.com. or theDavisFuneralHome.com

Local Services are under the direction of the Davis Funeral Home of Riverton.