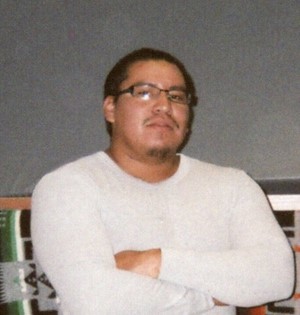 Guestbook 3
Funeral services for Mitchell J. C'Hair of Ethete are at 10 a.m. on Saturday, Jan. 7, at Blue Sky Hall at Ethete. Traditional services will be officiated by Crawford White with Catholic clergy presiding at the Catholic service.

Interment follows at the Arapaho Catholic Cemetery at St. Stephen's . A rosary will be at 7 p.m. on Thursday, Jan. 5, at the Davis Funeral Home of Riverton with a second rosary at 7 p.m. on Friday, Jan. 6, at Blue Sky Hall at Ethete with a wake following at 291 Plunkett Road on the Wind River Reservation.

He was a member of the Northern Arapaho tribe and worked as a laborer on reservation grant projects by aiding the elderly with firewood. He worked for Ellis and McNeal, laying concrete. He was also a Sho-Rap firefighter and worked for Wind River Transportation.

Mr. C'Hair was of the Catholic faith and belonged to the Native American Church. He participated in Northern Arapaho sundances. His family said he enjoyed playing basketball, going to the casino, working out, playing cards, working at the computer, and singing Arapaho songs with his children.