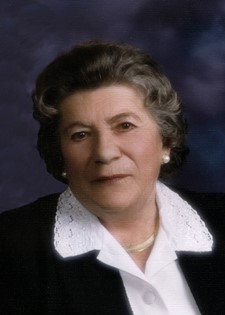 Guestbook 14
Funeral services for Elizabeth Wilson of Dubois are at 2 p.m. on Tuesday, Jan. 10, at the Headwaters Center in Dubois. Burial will follow at the Dubois Cemetery

Mrs. Wilson died on Wednesday, Jan. 4, 2012, at the Wyoming Medical Center in Casper, with her three daughters by her side. She was 89.

Elizabeth Ma'kka'y was born on Thursday, Aug. 24, 1922 in Also'sa'g, Hungary, to Antol and Rosalia (Toreki) Ma'kka'y. She lived with an old German couple after fleeing the advancing Russians.

She met Darwin Wilson, an American soldier, and they married in August of 1948 in Bamberg, Germany. They returned to the United States and lived in Battle Creek, Mich., where their daughter, Susan, was born. While on vacation to see the West, they stopped in Dubois and decided to make it their home. They had two more daughters, Lisa and Nora.

Her family said that among Mrs. Wilson's many interests, her family and friends came first. They said she enjoyed baking and sharing pies and cookies, and the couple enjoyed square dancing and going to the woods to search for rocks and other treasures. The family said she excelled in growing flowers and vegetables, even late in life and used the raised-beds her son-in-law built to grow the produce from which she made and shared her salsa. She also made Christmas fruit cakes, crocheted afghans for family and friends, and enjoyed going to breakfast with her friends on Sunday mornings. Her family said Mrs. Wilson loved animals, tame and wild, with the birds and squirrels eating freely on her deck, and her dachshunds and cats as her constant household companions.

She was preceded in death by her husband, Darwin Wilson; her parents, and nine brothers and sisters in Hungary.

Memorials may be made to the Wetern Fremont County Humane Society, P.O. Box 1198, Dubois, Wyoming, 82513