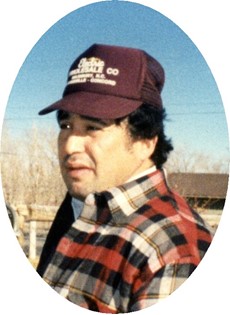 Guestbook 13
Johnnie E. Allanis, 52, of Riverton and Shoshoni died Thursday, January 12, 2012 at his sister’s home in Shoshone from health complications.

Johnnie Edward Allanie was born on Sunday, May 3, 1959 in Riverton to Clara Trujillo and Poscilio Allanis. He was baptized into the Catholic faith.

He graduated from Shoshoni High School and has lived in Riverton and Shoshoni for the past 52 years.

He married Letha Thrailkill on September 8, 2000 at Buckhorn Flats.

Johnnie had worked in the oilfield and in agriculture as a cowboy and sheepherder. He also worked for Smiths Grocery Store in Riverton.