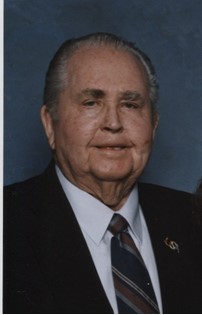 Jack was the second child of four They moved to Riverton, WY in 1932 and graduated from Riverton High School in May of l941, and enlisted in the United States Navy. He returned from WWII in 1946 and married the love of his life Mildred Katherine Willman on 07/02/1947 at the Missouri Valley Church.

Shortly after enlistment in the Navy he was sent to boot camp in September of 1941 at Alameda Naval Base, CA and Naval Ordinance school in San Diego CA. to serve his country. He was assigned to Pearl Harbor after it was bombed to help repair the airfields and bases. March 1942 he was assigned to the USS Enterprise CV6 until May 14, 1945, when it was struck by Kamikaze planes and forced to return to Bremerton Washington for repairs. Jack was then transferred to the East Coast and assigned to the USS Kearsarge as Chief Petty Officer in Ordinance, until his Honorable Discharge in April of 1946,

He was injured several times during battle, which affected him many times throughout his life and eventually forced him to become 100% disabled. Serving on the Enterprise during 17 battles from the Doolittle Raid to Okinawa. He was awarded the Navy/Marine Corp Medal for Bravery, Victory Medal, American Defense, Philippine Defense, Navy Good Conduct, American Campaign, WWII Occupational and Marine Oversees Asiatic Pacific Campaign, and was promoted to Chief Petty Officer one month before his 22nd birthday, he never bragged or would openly admit it but this type of honor was very rare in the Navy for a person of his age and experience.

During his life Jack endured many hardships, but never let them stop him from achieving success. Post navy he worked and lived at the Beaver Creek oilfield as a pumper, farmed for 15 years in Missouri Valley, owned the Wagonhound Ranch near Hamilton Dome and received the Outstanding Young Farmer award in 1959, for Fremont County, Wyoming.

In 1965, he enrolled at the University of Wyoming Business College, starting a career in banking in Colorado and Wyoming, also getting his appraiser and real estate licenses for both states. During his career he earned the respect of many in the business community and made several lifelong friends.

He was preceded in death by his Mother and Father, and great-grandson. Jayden Nicolas Long.

He is survived by his wife Mildred K. Long

His Daughter Jennifer Long, of Sterling, Co — her children, David and Buffy of Dalton, NE and sons - Broc, Davis, Rhett, and Kotr Dye; Anne and Griffith Kull III of Windsor, CO and their children Giffith IV and Annalyssa.