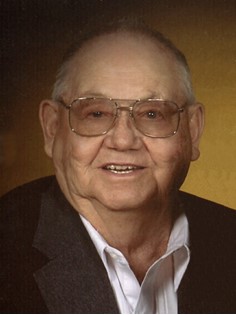 Guestbook 12
Funeral services for Bernard T. McCoy of Riverton are at 10 a.m., on Thursday, Feb. 23, at St. Margaret’s Catholic Church in Riverton with the Rev. Father John Gaffney officiating. Interment follows at Mountain View Cemetery in Riverton. A rosary is at 7 p.m. on Wednesday, Feb. 22, at the Davis Funeral Home of Riverton with visitation one hour prior to the rosary. Mr. McCoy died at Riverton Memorial Hospital on Sunday, Feb. 19, 2012. He was 91.

Bernard Thomas McCoy was born on May 16, 1920 in Mitchell, Neb., the son of William and Ida (McDowd) McCoy. He attended the first through sixth grades of school in Torrington, until the family moved to Riverton in 1933 to homestead in Paradise Valley. He then attended seventh through 12th in Riverton, being graduated in 1939.

On June 12, 1941, he married Frances Lillian Downey at St. Margaret’s Catholic Church in Riverton. The couple farmed in Paradise Valley for many years before selling the farm in 1965. They kept the house and a few acres for pasture. Mr. McCoy worked as a carpet layer for several businesses, including Stylhomes, Plains Furniture and Floor Covering, and Sears. He also did private contract work for various individuals, and laid carpet in the Jackson Lake Lodge. Later he bought the franchise for Service Master, and had this business for six years. In 1979, he and his wife opened their waterbed store, Sweet Dreams, and operated that until 1995. His family said Mr. McCoy enjoyed playing pinochle at Sertoma and bridge in the community. He was a member of St. Margaret’s Catholic Church and the Knights of Columbus-4th degree. He also served as a Senior Companion and hospice volunteer.

Mr. McCoy was preceded in death by his wife; his parents; one sister, Marguerite Stone; six brothers, Ambrose, Art, Cecil, Cletus, Harold, and Lawrence; his son, Charles McCoy, and his grandson, Victor McCoy. Memorials may be made to the Help for Health Hospice Home in care of the Davis Funeral Home, 2203 West Main Street, Riverton, WY 82501.