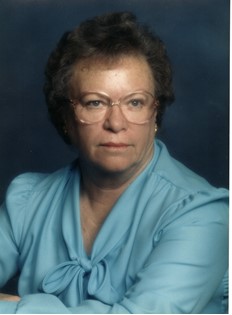 Guestbook 9
Funeral services for Ruby P. Miller, 82 of Arapahoe, are at 10 a.m. on Saturday, April 14, at the Davis Funeral Home of Riverton. The Rev. Dale Adams officiates and interment follows at the Collins Cemetery. Viewing is from 9-10 a.m. on Saturday, preceding the funeral service. Mrs. Miller died at the Poudre Valley Hospital in Fort Collins, Colo., on Sunday, April 8, 2012, at the age of 82. Ruby Pearl Bunner was born in Newcastle on Oct. 8, 1929, the daughter of William Newton Bunner and Lillie Dell (Worthington) Bunner, who were from Virginia. She grew up and went to school near Ocean Lake and, with her sister and brothers, would walk across the frozen lake to attend church. Mrs. Miller was a housewife, having married Joseph Edward Miller at the courthouse in Lander on Nov 7, 1946. When they were first married, they lived in a railroad car near Shoshoni, before moving to Arapahoe. At Arapahoe they made their home and raised their children. In the early 50s, they build the house in which Mrs. Miller still lived. The county named the road past their house "Miller Lane" in later years. She was of the Baptist faith. Her family said Mrs. Miller loved to crochet, making afghans and gifts for her children, grandchildren, great grandchildren, friends and others. They said she loved angels, wind chimes, gnomes, listening to music, growing flowers and plants, loved birds and used to raise doves until her health worsened. Mrs. Miller worked at the Arapaho cannery early in life. Then she worked as a dishwasher at various places, including the Teton, Choppings, and the Airport Café. Survivors include sons, Milton Edward "Butch" Miller and wife Debbie of Riverton, and Lawrence "Larry" Miller and wife Valene of Arapahoe; daughters, Iris Pearl Lawrence and husband Glen of Riverton, Betty Jo Spencer and Lewis of Rexburg, Idaho, and Patricia "Patti" Lopez of Riverton; 11 grandchildren, 33 great grandchildren, and one great-great grandchild; a brother, Raymond "Pat" Bunner and his wife Renee of Glenrock. She was preceded in death by her husband, Joe Miller; parents, William Newton Bunner and Lillie Dell (Worthinton) Bunner; brothers, John, George, Preston, and Billy Bunner; sisters, Lois Bunner, Maedean Waring, Hattie Rittenhouse, Ester Miller, and Opal Schumacher, and one granddaughter, Memorials may be made to the Wind River Dialysis Center in care of the Davis Funeral Home, 2203 West Main St., Riverton, WY 82501. On-line condolences may be made at: thedavisfuneralhome.com Arrangements are under the direction of the Davis Funeral Home of Riverton.