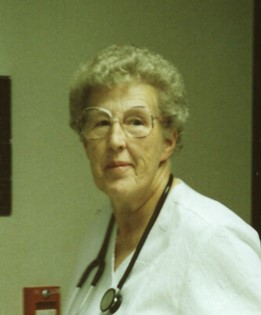 Guestbook 14
Hope Starwalt, 86, died at her home in Riverton on Friday, May 4, 2012. Funeral services are at 3 p.m. on Tuesday, May 8, at the Davis Funeral Home of Riverton, Rev. Bob Connelly will officiate, with viewing one hour preceding. Interment is at Mountain View Cemetery in Riverton.

Kathryn Hope Jackman was born in Lawrenceville, Ill., on Aug. 31, 1925, the daughter of Mack Herbert Jackman and Mary Grace (Bass) Jackman. She was graduated from high school in Lawrenceville and Vincennes University in Indiana. Mrs. Starwalt was a Registered Nurse.

She married Leonard R. Starwalt on July 2, 1949, in Laramie. She was of the Baptist faith and belonged to the Hillcrest Baptist Church where she helped with vacation Bible school and sang in the choir. She was the Hillcrest "Mother of the Year" in 1996.

Her family said Mrs. Starwalt dedicated her life to nursing in Illinois, Utah, and Wyoming. The family moved to Riverton in 1954. She worked in Riverton on the first day the old hospital opened and on the first day the present hospital opened. They said she had a passion for intensive care. The family said Mrs. Starwalt loved to watch baseball, basketball, and football. She had played on a women's softball team in the 1940s and served as treasurer of the Riverton Legion team in 1996.

She was preceded in death by her husband, Leonard Starwalt, and a son, Steven Starwalt.

Memorials may be made to the children's program at Hillcrest Baptist Church or the Help for Health Hospice program in care of the Davis Funeral Home, 2203 West Main St., Riverton, WY 82501.