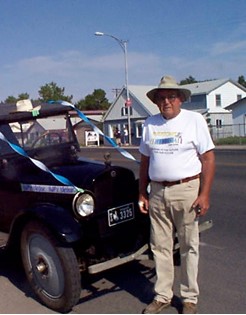 Guestbook 13
A. Rex Rogers, 80, died at his home in Riverton on Monday, May 21, 2012. Memorial services are at 10 a.m. on Saturday, May 26, at the Davis Funeral Home with the Rev. Doug Hill of Pavillion officiating. Cremation has taken place an inurnment will be in the Rawlins Cemetery at a later date. Arthur Rex Rogers was born in Raton, N.M., on Oct. 21, 1931, the son of Melvin Foy Rogers and Amanda Ernestine (Everett) Rogers. He served with the Wyoming National Guard during the Korean War. He married Margaret Nancy Holseapple in Rawlins on Dec. 25, 1953.. Mr. Rogers was a geologist in the Wyoming minerals industry and the couple had lived in Riverton for 46 years. He spent most of his working career as a geologist in the Wyoming oil, gas, and mineral industry, eventually owning and operating Rough Country Drilling for over 20 years. He was a member of the Wyoming Studebakers Drivers Club, holding the office of president at the time of his death, of the Riverton Gem and Mineral Club and was a past local and state president, helping to organize many local and state rock shows, and a long-time member of the American Institute of Mining Engineers. Mr. Rogers got his private pilot's license in 1969 and his family said he loved to fly, owning and flying 4838 Delta, his Cessna 182 for many years. He purchased a 1923 Light Six Studebaker touring sedan in 2003 and spent hours tinkering with hit, showing, and giving rides to family and friends. Survivors include his wife, Margaret Rogers of Riverton; a son, Alan Rogers and his wife Kathy of Hot Springs, S.D.; a daughter, Evonne Rogers and her husband Ron Siekert of Albin; a son-in-law, Craig Johnson of Cle Elm, Wash.; grandchildren, Nic Rogers of Laramie, Cori Siekert of Albin, and Darci Rogers of Hot Springs, S.D.; a brother, Gordon Rogers of Riverton, and a sister, Gay Till of Cheyenne. He was preceded in death by a daughter, Beth Rogers; a grandson, Brent Jonson, and a brother, Del Rogers. On-line condolences may be made at: www.TheDavisFuneralHome.com Arrangements are under the direction of the Davis Funeral Home of Riverton.