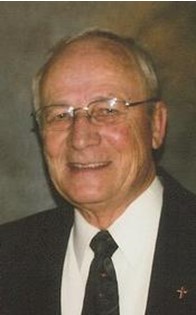 Guestbook 1
After a year-long battle with heart and lung problems, Donald Johnson was called to his eternal rest on Monday, July 9, 2012, at Manning Regional Healthcare Center in Manning, Iowa, at the age of 74 years, 3 months and 11 days.

Donald Leroy, son of Maynard and Daisy (Wolf) Johnson, was born March 29, 1938, at Ladysmith, Wisconsin. He was baptized June 19, 1938, at the Lutheran church at Sheldon, Wisconsin. On March 18, 1951, he was confirmed at St. John’s Lutheran Church in Ladysmith. As a young boy, Don’s family lived in many places in Wisconsin. He attended kindergarten in Milwaukee, first grade at country school near Sheldon, second grade at Glenflora and third grade at Birchwood. Don began fourth grade in Tony and graduated from Tony High School in 1956. He then studied Architectural Drafting at Dunwoody Institute in Minneapolis, Minnesota, and subsequently worked the next two years as an Architectural Draftsman for Sheehy Construction in St. Paul.

On August 27, 1960, Don was united in marriage with Joan Marliene Burke at Siloa Lutheran Church near Braham in Isanti County, Minnesota. Five children were born to this union.

In retirement, Don continued to preach as needed for area LCMS churches. Joan died on Thanksgiving Day, November 24, 2011. Due to the weather and health concerns, Don then lived with his daughters in Iowa until moving into his own place in Manning in May of 2012.

Don was a member of Bethel Lutheran Church in Lander, Wyoming. Throughout the years, Don enjoyed hunting antelope, deer and elk, going fishing, and hunting, cutting and polishing rocks. He also enjoyed feeding and watching birds and other wildlife.

Don was preceded in death by his parents, wife, and a son-in-law Michael Syndergaard.

The Johnson & Woodhouse Funeral Home in Manning, Iowa is in charge of arrangements.