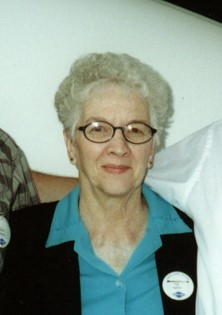 Guestbook 3
Memorial services for Patsy A. “Pat” Svilar will be conducted at 11:00 a.m. on Friday, October 19, 2007 at the Davis Funeral Home in Riverton, with Pastor Scott McFarland officiating. Interment of cremated remains will follow the service at the Hudson Cemetery. A dinner will be held immediately after the burial at Hudson Town Hall.

Patsy Ann Svilar was born on April 6, 1932, in a sod house on a homestead near Laurel, Mont., the daughter of Charles Jess Taber and Anna (Carlson) Taber. Soon afterward, the family moved to Lander, and then to a farm close to the current Rendezvous Road. She moved to Hudson to start the fourth grade, and resided in Hudson for the rest of her life.

On June 4, 1950 she married Victor D. Svilar in Lander. He preceded her in death.

Mrs. Svilar worked in various family businesses throughout her life, and as a substitute Hudson Post Office Clerk during the 1950’s and early 1960’s, retiring in 1997 after 31 years as a clerk for the Fremont County Treasurer’s Property Tax Office in Lander.

She was a charter member of the current Frank Homec Veterans of Foreign Wars Auxiliary #4799, Hudson Homecrafters Club and Hudsonettes Homemaker Club.

In addition to her husband, Victor D. Svilar, she was preceded in death by her parents C. Jesse and Anna Taber; brothers Carl and Stan; sister DeVee; sister-in-law Sophie Svilar Irwin; one nephew and one niece; numerous aunts and uncles.