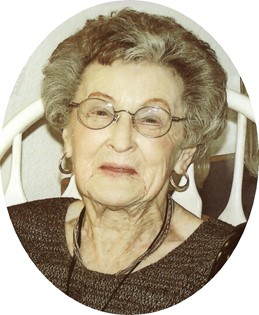 Guestbook 3
Edna Jean “Peggy” Rawdon, age 94, of Riverton passed away on Wednesday, July 11 at hospice care in Casper. Her death resulted from injury suffered from a fall in her home on July 2.

Peggy was born and grew up near Perth, Western Australia. Her parents owned and operated a mercantile store in the small town of Harvey, and Peggy and her sister helped in the store. Peg described the sound of rain beating on the tin roof of the family store as one of her fondest memories of girlhood. She was an active child who loved all manner of sports, and watching ice- skating and tennis on TV brought her great pleasure during her later years.

After the war the couple settled in Rapid City, South Dakota, where Clark, who worked for Buckingham’s (trucking) built a small house just out of town for Peggy and the growing family.

In 1954, the family of six moved to Medina, Western Australia, where they lived near Peggy’s parents, before returning to South Dakota in 1958.

Finally, Peg and Clark moved to Wyoming, living in Thermopolis, Morton, Jeffrey City, and Shoshoni, before settling in Riverton in the mid 80’s.

Peg devoted herself to her family- husband and four daughters -and to making a beautiful home. She loved planting flowers in the spring, and shared their beauty with others all summer. She was an accomplished bread baker and sewed beautiful quilts. A member of the Riverton First Baptist Church, she made many friends there and may friends at Owl Creek Apartments, where she lived for the last nine years of her life.

Peg was preceded in death by her husband, Clark, and one daughter, Shirley Agbannawag, of Riverton, and her sister, Rae Dalziel of Queensland, Australia.

Friends and family are invited to attend a memorial service at Davis Funeral Home on Monday, July 16, 2012 at 2:00 pm. Pastor Rex Whitman will be officiating. Memorials may be made in Peggy’s name to “The Flower Fund” at Owl Creek Apartments to purchase plants.

On line condolences may be made at www.thedavisfuneralhome.com