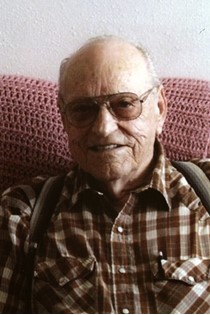 Mr. Greenhalgh attended Wilford, Id. grade school for eight years and then went to Sugar City High School in Sugar City, Id. where he graduated in 1948.

He married Mary Weimer Greenhalgh on Aug. 3, 1955 in Reno, Nv. and to that union 7 children were born. They were later divorced.

He entered the US Army in 1954 where he served for 2 years during the Korean War in the Territory of Alaska. While in the service he became an auto mechanic and later worked in various places in Riverton. His family moved to Riverton in 1962 from St. Anthony, Id where he has lived for the past 50 years. He was also a truck driver for Christianson Water Service and Wind River Ready Mix until he retired.

He loved hunting, fishing and bowling in his younger years, and currently he loved his plants, gardening and playing cards with his friends at the Senior Center. He was a member of the VFW, Eagles and very active at the Riverton Senior Center helping set up tables before meals and playing cards.