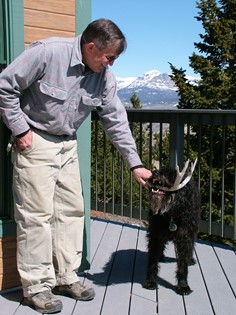 Guestbook 19
Charles A. “Alec” McCrackin, 66, of Dubois, Wyoming and Atlanta, Georgia died Wednesday, August 1, 2012 from an apparent heart attack while hiking with his family to Lake Louise, south of Dubois in the Wind River Mountains.

Memorial services will be held Wednesday, August 8, 2012 at 5:30 p.m. at the Dennison Lodge in Dubois. According to his wishes, cremation has taken place.

Charles Alexander McCrackin was born, June 18, 1946 in Seattle, Washington to Joseph Ralston and Frances (Owens) McCrackin. He grew up in Atlanta and graduated from Northside High School with the class of 1964. He received his Bachelors of Arts degree from the University of Pennsylvania in 1968. He married Bobbie Humenny in Pittsburgh on July 1, 1967. To that union two children were born.

Alec owned and operated the family manufacturing business, “Bags by Frances,” in Atlanta, Georgia. He retired in 1994.

He was a devoted husband and parent. He loved the outdoors, working with his hands, and spending time with his loyal canine companion Phoebe. Alec travelled to over 30 countries throughout his lifetime but found his true home in Dubois. He and Bobbie recently built a house off of Union Pass Road, and his handiwork and creativity are present throughout the property. He loved the people of Dubois and the gracious spirit of the community.

Services are under the direction of the Davis Funeral Home and Crematory of Riverton.