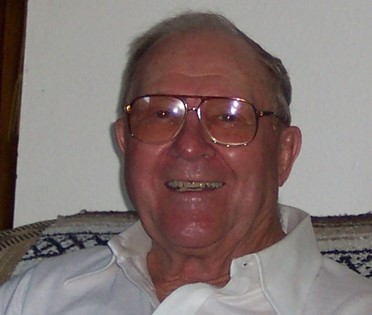 Memorials services will be held on Friday, August 17, 2012, at 2:00 pm, at the Davis Funeral Home. Pastor Mark Thurman will officiate. Military honors and graveside services will follow at Mountain View Cemetery.

James Edward Williams was born on March 25, 1926, in Walsenburg, CO, to Albert Robert Williams and Ida Dell (Blake) Williams. He graduated from the Walsenburg High School.

Jim served in the U.S. Navy from May of 1944 being honorably discharged May of 1946. He served on the USS Frazier and the USS Dortch earning the Victory Medal, American Area Campaign Medal, Asiatic Pacific Area Campaign Medal as well as the Philippine Liberation Ribbon with one star.

On November 8, 1948 he married Dorothy Lingar in New Mexico. Together they had two sons, Howard “Buddy” and James Jr.

He then moved to Wyoming in 1948, working in the oil fields as a roughneck. Early in 1950 he went to work for the uranium industry, as an exploratory driller, in the Gas Hills until his retirement.

His family said he enjoyed taking care of his yard, repairing clocks, and tinkering in his garage. He took special joy in his family and friends, was very proud of his grandsons, Jebadiah and Leonard.

He is survived by his sons, Howard F. “Buddy” Williams and his wife Debra and James E. Williams, Jr., all of Riverton; his grandsons, Jebadiah and Leonard Williams also of Riverton; sister, Ida; and sister-in-law, Barbara Williams of Arizona.

He was preceded in death by his parents, his wife, Dorothy; two granddaughters; and several brothers and one sister.

The family request that memorials be made to the Riverton VFW in care of Davis Funeral Home. On-line condolences for the family may be made at www.TheDavisFuneralHome.com.