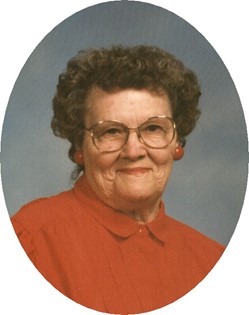 Esther grew up in Scottsbluff and Torrington and married her first husband John Phillip Heinrich near Mitchell, Nebraska on January 20, 1935. All three daughters were born to that union. John passed away on Sept. 8, 1961. Esther married Henry Haun August 24,1963 in Riverton and they were married for almost 43 years until Henry passed away June 25, 2006.

Esther was a member of Trinity Lutheran Church, enjoyed country music, reading, crocheting, making beautiful dollies, gardening and flowers. She was a homemaker and helped her husband Henry with his registered Hereford Bulls.

Preceded in death by her husbands, 4 brothers, and a sister, granddaughter Lisa K Vogelsang and grandson Greg Vogelsang.

Memorial contributions to the Trinity Lutheran Church. On-line condolences for the family may be made at: theDavisFuneralHome.com. Services are under the direction of the Davis Funeral Home of Riverton.