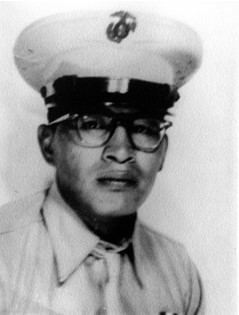 Gerald Paul Headley, Sr. was born March 24, 1946 at Fort Washakie, Wyoming to Arnold Headley and Catherine (Bear) Redfield. He was raised in Thermopolis and graduated Flandrea Indian High School in South Dakota. He attended Fort Lewis College in Durango, Colorado before serving in the US Marine Corp during Vietnam. He received the National Defense Service Medal, Vietnam Service Medal with One Star, Vietnam Campaign Medal with Device, Combat Action Ribbon, Riffle Sharpshooter Badge, and the Purple Heart. He was honorably discharged on January 11, 1969 as a Corporal.

He was a member of the St. Margaret’s Catholic Church, ARTHUR-ANTELOPE BROWN POST NO. 84 and served many years as commander.

He moved back to Arapaho following his military career. He married Alice L. Bell on July 15, 1984 at St. Stephen’s Catholic Church.

His family said he was an avid outdoorsman who taught all his kids to hunt and fish. He enjoyed reading Western Books especially Louis L’Amour novels, watching the Denver Broncos and boxing on T.V. He enjoyed spending time with his grandchildren and traveling all over mainly in the mountains.

He worked most of his life for the Road Department with the BIA and was currently employed by the Arapaho Economic Development Committee. Throughout his life he also worked on Oil Rigs, the Arapaho Ranch, the Riverton VA clinic, and the Wind River Casino Security.