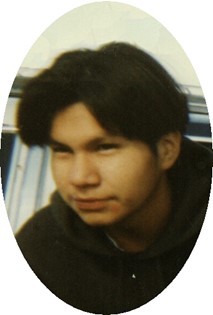 Funeral services will be 10:00 a.m., Saturday, September 15, 2012 at the Blue Sky Hall at Ethete. Burial will follow at Sacajawea Cemetery at Fort Washakie. A wake will be Friday evening, September 14, 2012 at the Hall.

He was raised by his grandmother, Vivian Armajo and attended school at Fort Washakie and graduated, Flandreau Indian School in South Dakota and attended Haskell College in Lawrence, Kansas. He has lived the majority of his life in the Ethete area.

His family said he was an accomplished artist working with charcoal drawings; he was a composer of music writing his own songs and lyrics playing the guitar. He had one CD out and played his music on 88.1fm. They said he also liked working and enjoyed tinkering on electronics and computers.

His grandmother said he was of the LDS faith and respected Native American Traditions and was raised the Indian way.

Travis worked for the Wind River Casino in customer service and surveillance in the security department of the Casino. He had most recently been working for American Laundry in Lander and had just been hired at the Maverick Motel in Lander.