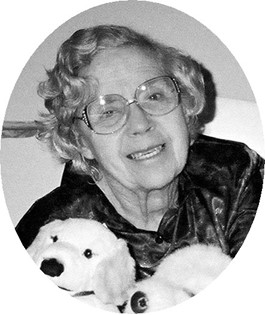 Visitation and Rosary will be held at the Davis Funeral Home at 7pm on Thursday, October 25. A Funeral Mass will be celebrated at St. Margaret's Catholic Church at 10am on Friday, October 26. Burial will follow in Mountain View Cemetery.

Mary Lou Roos was born in Cheney, Washington on March 21, 1912 to John Eugene and Marie Eugenie (Georger) Roos. She was the youngest of six children and the only girl. She graduated from Cheney Normal School (now Eastern Washington University) with a three-year teaching certificate in 1933 and taught in a one-room schoolhouse in Washington State. She married Dwight Corrier on June 20, 1936 in Mazama, Washington. Dwight was a pilot in the Army Air Corps and died in April of 1943 when his plane went down on a training flight.

Mary Lou married Roger Barthazon in September of 1944, and moved with him to Riverton in 1946 after he returned from duty in the Philippines with the U.S. Army. They built a house in the Ashgrove addition, and, in 1953, adopted their daughter, Anne. Mary Lou was active as a leader in Brownie Scouts and 4-H. She enjoyed entering baked goods, artwork, and flowers in the Fremont County Fair. She was a parishoner of St. Margaret's Catholic Church. The flower gardens around her home were her delight, as were her dogs.

She moved to Homestead Living in 1999, and moved to North Carolina in 2002 to be near her daughter. She was preceded in death by her husband, Roger in 1984, and is survived by her daughter and son-in-law, Anne and Steve Blanchard of Chapel Hill, NC, and her grandchildren, Marie Louise Blanchard and Steven Blanchard, Jr.

Memorials in her memory may be made to St. Stephens Indian Mission Foundation, Inc., in care of Davis Funeral Home, 2203 West Main Street, Riverton, WY 82501.