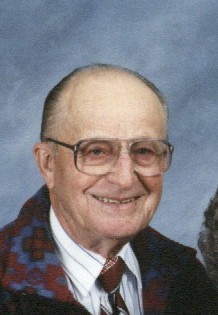 Guestbook 1
Funeral services for Frank J. Appelhans will be conducted at 2 p.m. on Friday, Nov. 9, at St. Margaret's Catholic Church in Riverton, with the Rev. Father Andrew Duncan officiating. Interment will follow at Mountain View Cemetery in Riverton. A rosary will be held at 7 p.m. on Thursday, Nov. 8, at the Davis Funeral Home of Riverton, with viewing from 6:30 to 8 p.m. at the funeral home. Mr. Appelhans died on Wednesday, Oct. 31, 2007 at Wind River Healthcare in Riverton. He was 93 years old. Frank John Appelhans was born on May 18, 1914 in Montrose, Colo., the son of Felix Appelhans and Mary (Mildenberger) Appelhans. The family moved to the Riverton area in about 1918 and he grew up on a farm. On Nov. 27, 1944 he married Barbara Burtch at St. Margaret's Catholic Church in Riverton. He farmed in Riverton Valley, retiring in 1978, and continued to farm part-time in the spring and fall for another 10 years. Mr. Appelhans was a member of St. Margaret's Catholic Church, and was a charter member of the Wind River Chapter of the Knights of Columbus. He was a charter member of the B.P.O.Elks Lodge No. 1693 in Riverton. Mr. Appelhans received numerous agriculture awards over the years, including High Sugar Beet Grower, Highest Malt Barley Producer in the state of Wyoming, and Outstanding Farmer in the Riverton area. He was also a past commissioner for the Riverton Volunteer Fire Department. His family said he enjoyed spending time with his family, fishing, making wind toys and giving them to family members, liked working in his yard after moving into town, and enjoyed dancing, especially the polka. He followed his children's and grandchildren's sporting events and loved to travel. Mr. Appelhans is survived by his wife, Barbara of Riverton; sons, Dennis Appelhans and his wife Minnie of Riverton, and Brian Appelhans and his wife Ida of Denver; daughter-in-law, Sandra Appelhans of Lander; grandchildren, Lisa Appelhans of Lander, Annje and Ryan Esvelt of Rice, Wash., Warren and Jamie Appelhans of Powell, Heather and Mike Kuzara of Buffalo, Dustee and Frank Martinet of Boise, Idaho, Joe and Karla Appelhans of Soldotna, Ark., Wade and Michelle Appelhans of Lander, Aaron and Aimee Appelhans of Laramie, and Barry Appelhans of Denver; great grandchildren, Sophia and Clara Kuzara, Cody Esvelt, Gracie Appelhans, Riley and Kolter Appelhans, Cade and Evan Appelhans, Madelyn, Donovan and Aubreigh Appelhans; sisters, Monica Heberlein of Cheyenne, Emelia Doherty of Missoula, Mont., Rose Reuber of Las Vegas, Nev., and Elizabeth Botts of Riverton; numerous nieces and nephews. He was preceded in death by his parents; son, Gerry Appelhans; brother, Joe Appelhans; sister, Helen Becker; great granddaughter, Hailey Esvelt; brothers-in-law, Harold Heberlein, George Doherty, Al Reuber, and Clyde Botts. Memorials may be made to the charity of the donor's choice. On-line obituaries are available and condolences for the family may be made at: thedavisfuneralhome.com Services are under the direction of the Davis Funeral Home of Riverton.