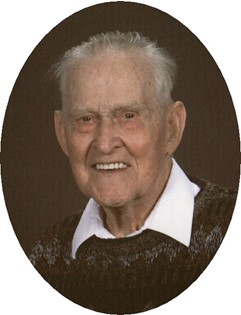 Funeral services will be held at 10:00 a.m. Friday, November 30, 2012 at the First United Methodist Church in Lander with Pastor Mark Calhoun officiating. Interment will follow at Mount Hope Cemetery. Military honors will be provided by the Friday-Truan Detachment #683 Marine Corps League and Veterans. James Junior Milleson was born August 24, 1924 in McCook, NE, the son of James and Myrtle (Baugher) Milleson.

He grew up and attended schools in McCook and joined the U.S. Marine Corps in 1943. He served in Hawaii, Midway and Guam during World War II and was honorably discharged in 1946.

On October 10, 1948, he married Myrna Farthing in Denver. The couple made their home in Denver, where he worked for Gates Rubber Company and attended Midwest Trade School under the GI Bill, where he learned auto mechanics. Their two daughters, Mary and Nancy, were born in Denver.

In 1953, the family moved to Lander, Myrna’s home town. Mr. Milleson went to work for Smail Motors, the Jeep Agency, and in 1957 he went to work for Fremont Motors. He continued there until his retirement in 1988.

Sons Tom and David were born in Lander.

Mr. Milleson enjoyed hunting and fishing, working in his yard, traveling, and family reunions. He especially enjoyed spending time with his children and grandchildren. Jim was an active member of First United Methodist Church and devoted many hours to the Thrift Shop until his failing vision prevented him from driving. He also volunteered for almost 12 years at the Care and Share Food Bank.

In October, 2011, Jim was a passenger on the Honor Flight to Washington, D.C. The family said he proudly flew his flag every day at his home.

Mr. Milleson was preceded in death by his parents, brother Glen, and sister Pansy.

Memorial donations may be made to the Friday-Truan Scholarship Fund, or the Lander Senior Center, in care of Davis Funeral Home, 2203 W. Main, Riverton, WY 82501.