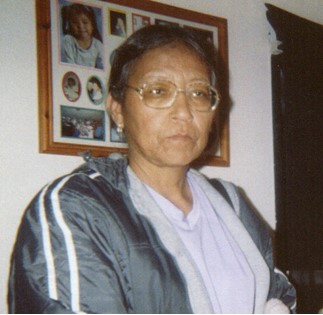 Funeral services will be conducted at 10:00 a.m. on Wednesday, November 28, 2012 at St. Stephens Catholic Church. Burial will follow at Arapaho Catholic Cemetery. A Rosary will be held at 7:00 p.m. Tuesday, November 27, 2012 at Davis Funeral Home, with a wake following at Great Plains Hall. An overnight vigil will continue at the family home.

Lorraine Monroe was born in Lander on July 23, 1955, to Fredrick Herman Monroe, Sr. and Joan Caroline (Duran) Monroe. She lived in Arapahoe all her life.

She attended Mill Creek Elementary School and was graduated from Flandreau Indian School in 1973. She went on to Kicking Horse Job Corp, where she attained certificates as a counselor aide and for office skills in 1976.

Ms. Monroe enjoyed playing bingo, going to the casino, spending time with family and friends, and taking care of her grandchildren. She supported her grandchildren at all their sporting events.

She had been employed at Riverton Memorial Hospital, Wind River Health Care as a CNA, and as a child care provider.

Ms. Monroe was a homemaker, and a member of the Catholic Church and Native American Church.

Services are under the direction of Davis Funeral Home