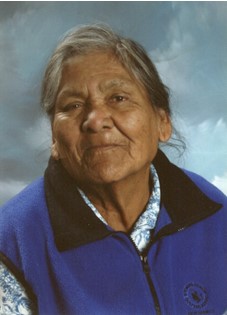 Ethel Marie LittleWhiteman was born in Miles City, Montana on February 11, 1933 to Stanley and Grace (WalkingBear) LittleWhiteman. Born to the Whiteman family, she was adopted by the Teeth family and raised as one of their own daughters. As a member of the Northern Cheyenne Tribe, she was the Pipe Carrier for both the Little Whiteman and Teeth Families and was the last of her generation of the Whiteman family. Ethel grew up in the Lamedeer, Montana and attended Ashland Elementary School and received a certificate from the University of Wyoming in basic nutrition.

On March 1, 1954 she married Vincent Paul Bell at St. Stephen’s Catholic Church. Together the couple celebrated 51 years of marriage.

Mrs. Bell was a member of the Catholic Church and enjoyed doing beadwork.

On-line condolences for the family may be made at www.thedavisfuneralhome.com. Services are under the direction of the Davis Funeral Home of Riverton.