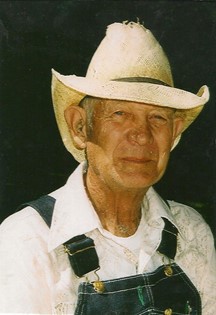 Guestbook 15
A very special man went to be with his one and only. Ivan R Haggerty of Paradise Valley passed away December 5, 2012 at Riverton Memorial Hospital after a short illness. The viewing will be Friday, December 7th between 6:00 and 7:00 p.m. at the Davis Funeral Home. The Memorial services are at Davis Funeral Home at 10:00 a.m. on Saturday, December 8th, with Interment at Mountain View Cemetery following the service. Ivan Roy Haggerty was born to Roy Gilbert Haggerty and Ester Cornelia Sayer on July 14, 1924 in Broadwater, Nebraska. He moved with his family to the Riverton area at the age of 13 in April of 1938. He attended school in Riverton for two years after which the family moved to their Paradise Valley Homestead. Until graduation he attended Shoshoni High School. He married Nellie Geraldine Chopping November 6th 1944. Together they started a farming operation in the Paradise Valley area. He enjoyed farming and referred to himself as a “Tiller of the Soil” and referred to his farm as “Happy Acres”, where he raised cows, sheep, chickens, and pigs. A truly diversified farmer, he grew corn, beans, sugar beets, barley, wheat, alfalfa and did custom combining. He and Gerry also raised five roses and one thorn (children). Ivan was a member of the Shoshoni School board, serving on the RVEA , Co-op and Tri State board of directors. Among his other achievements, he was awarded the Top Grower Award for Coors Beer in 1992 and was named Ag Man of the year. He enjoyed horseshoe pitching and was a State Champion. Survivors include his brothers Cleo, Earl and Roscoe, his daughters Shirley Anderson, Ellen Eisemann and husband Dan, Edith Pryor and husband Butch, Sandra Bolte and husband Allan, Faye Hill and husband Michael, his son Roy and wife Juanita, seventeen grandchildren, and thirty-five great-grandchildren. He was preceded in death by his wife of 50 years Gerry, his brother Francis, and grandson Mark Haratyk. Memorials may be made to the Shoshoni Alumni Scholarship Fund, the United Methodist Church of Riverton or a charity of your choice.