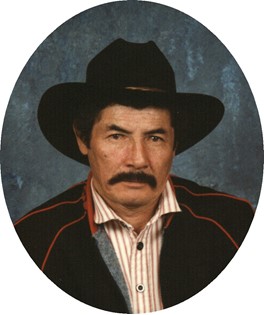 Guestbook 1
William James “Jake” Trosper Jr. 73, passed away at his home in Ethete, Wyoming on December 6, 2012 surrounded by his family.

Willie was born June 8, 1939 in Fort Washakie, Wyoming to William Clifford Trosper and Margaret Amos Trosper. His Arapaho name was Hoowuhuu Hokooxuno’ which meant “Many Teepee poles”. After his father passed away, he was raised by James and Bridget Trosper along with Maggie Atkins Trosper, Caroline Goggles and Verna Thunder. He attended grade school at St. Michaels Mission where he was an Alter boy and continued his education at Fremont Vocational High School in Lander where he excelled as a basketball player, graduating in 1958. He married his first wife Phyllis Chingman on October 10, 1958 from that union they had 4 children. They later divorced and he married Florence M. Gambler on June 27, 1998. He was employed with the Shoshone and Arapaho Head Start program for 18 years from 1966 to 1984 at which time he was employed by Fremont County School District #14 as a custodian where he retired in June 2000. He enjoyed Jockeying and worked as a guide in the mountains above Dubois. Willie enjoyed working and training relay horses with his brother Mert for the Lander 4th of July celebration. He was a member of the Wind River Indian Athletic Association and the Rodeo and Pow Wow association and helped organize and participated in many of their activities. Willie also served on the Arapaho Ranch Board until the time of his passing. Willie lived the cowboy life, managing his own ranch and helping neighbors and friends whenever they needed anything. When he decided to go into ranching, he often went to his mentor Bill Thunder for advice and help. He was known to be quite a jokester and quick witted. Willie enjoyed many things, he especially enjoyed attending rodeos, riding horse, team roping, bowling and hunting Big Horn Sheep. After his retirement he enjoyed watching NFL games, the PBR, traveling and visiting the local casinos. Willie will be remembered for his great love of things, he loved good food, good company and being around his family and doing things on the ranch. He loved watching his granddaughter Monica rodeo. He loved to speak his Arapaho language and was as consultant for the Elders and Language programs. Survived by his wife, Florence M. Trosper, Aunt, Verna Thunder, Aunt, Caroline Goggles, Aunt Virginia Sutter, Children; Glenn Hirsch of Joplin, Missouri, Challis Trosper, Leslie Trosper, W. Todd Trosper, Lydell (Anna) Whiteplume, Jim (Cathy) Shakespeare, Steve Aragon, Rebecca Hughes, Tammy (David) Snyder, Debbie Hughes, Melanie Gambler, Teresa Hughes, Monica Gambler, brothers; Kenneth “Butch” (Karen), Merton Trosper, Milton(Patricia)Trosper, Bryan Trosper, Dan Brown, Don (Pam) Gambler, sisters; Yvonne Trosper, Harriett Trosper, 30 grandchildren and 47 great grandchildren, numerous nieces and nephews, cousins and other extended family of the Amos, Thunder, Goggles and Trosper families. Preceded in death by his parents William C. Trosper and Margaret Trosper Ruis, sisters, Arleta Trosper, Elouise Ruis, brothers: Reggie Ruis, Ronnie Bell, grandson WinterHawk LeBeau, niece, Holly Trosper, nephew, Robbie Bell, Arlo Amos, Lilian Hendrickson, Chris Goggles, Bill Thunder, Bridget Trosper, James Trosper. The family would like to thank Dr. Cardinal and the IHS staff, Amedisys Hospice nurses and staff, Doctors and staff of the Rocky Mountain Oncology clinic in Casper, nurses and staff of the Lander Valley Regional Hospital and the many friends and family for their continued support of Willie and the family during his illness.